This entry is a deeper dive into the tribe we call “Infinite Monkeys and a Typewriter.”

This tribe of urbanites and suburbanites is nearly half-and-half men and women, and they are rather solidly working-to-middle-class.

The internet is a very big place, and fully-realized tribes lacking a clearly defined narrative are inevitable. What unites this bunch is a seemingly disparate assortment of shared affinities, interests, and passions.

DEMOGRAPHICS —Infinite Monkeys and a Typewriter

For all statistical intents and purposes the gender divide is essentially even.

While the segment of this tribe earning over $100k annually under-indexes by 0.27 times, the remaining income brackets are represented to degrees ultimately rather close to the U.S. average.

Millennials and boomers, two generations often pitted against each other in the media, each make up approximately ¼ of this audience. Gen Z is largely sitting this one out, but the boomers are here to a degree that exceeds their presence in the average U.S. online audience by 1.59 times.

INFLUENCERS — Infinite Monkeys and a Typewriter

This is not only an unlikely collection of notables to see bundled together, but each one of these individuals can boast counting at least 10% of this tribe’s members as their fans. That is rather significant.

For fun, let’s highlight Soleil Moon Frye, who, starting when she was 8-years old, played the title role in all four seasons of the 80s family sitcom, ‘Punky Brewster.’ She maintains a strong social media presence, with over a million followers on Twitter, and will even be starring in a 10-episode revival of ‘Punky.‘

BRANDS —Infinite Monkeys and a Typewriter

In reality, it’s quite easy to imagine a group of people who share such interests, but it’s still fun that it’s this rather specific and varied combination.

Literacy and gender equality focused non-profit, Room to Read, is a brand with which 6.77% of this tribe’s members concern themselves. This percentage is 27.67 times greater than the index.

TV Shows—Infinite Monkeys and a Typewriter 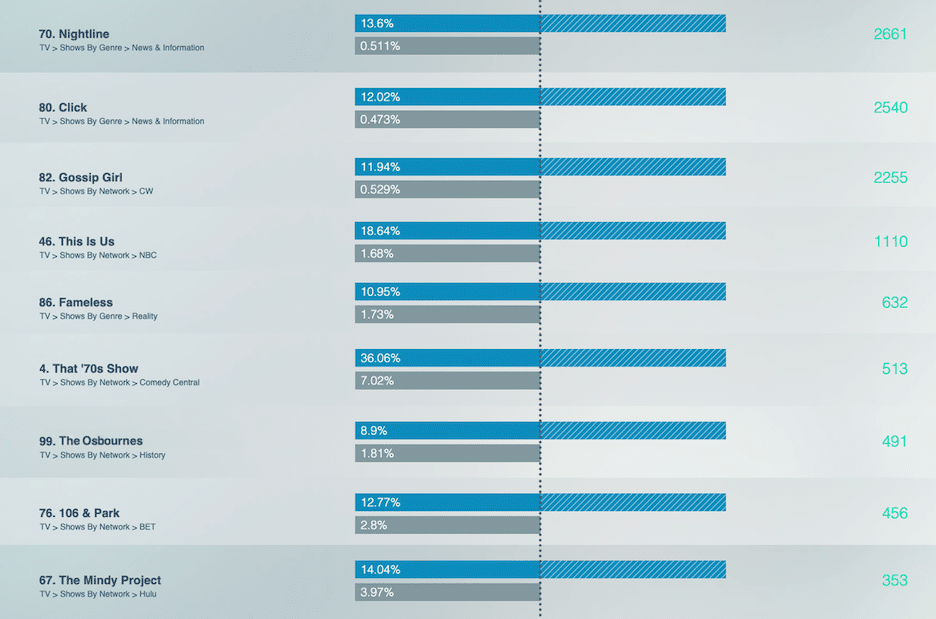 A mixed bag here, and we would expect no less from this whimsical assortment.

Mindy Kaling’s cancelled, but eternally on streaming, ‘The Mindy Project,’ is a favorite show with 14.04% of this tribe’s members. This is a bit over 3 ½ greater than the U.S. average.

WEBSITES —Infinite Monkeys and a Typewriter

As is somewhat detectable throughout, however eclectic the favorites, this is a tribe with an interest in TV, movies, music, arts, and popular culture. With iD, RogerEbert.com, Defamer, Pitchfork, and arguably Kickstarter, we can see these general interests explored.

PERSONALITY TRAITS—Infinite Monkeys and a Typewriter

Those described as exhibiting the personality trait, trust, proceed with the assumption that people are fundamentally fair and well-intentioned. While not saps or pushovers, they believe that if you approach people in good faith, it increases the likelihood that they will respond in kind.

This tribe averages in the 64.85th percentile for possessing this trait.