This entry is a deeper dive into the tribe we call “HipComs Plus.”

This is an urban and suburban tribe, skewing female and under age 34.

They come together via a shared loved for some of the more unique and creative American sitcoms of the ’00s and ’10s.

Those earning under $50k a year are present here to a degree that is 1.22 times greater than the index. While those earning between $50k and $100k are under-indexed by 0.13 times, they still represent more than ⅓ of this tribe’s members.

Comedy Central’s ‘Broad City,’ a truly original and hilarious love letter to both the beauty of close friendship, and New York City, is a top program for 10.2% of those found here. This percentage over-indexes by 22.52 times.

Five series regulars, and one memorable recurring performer, from NBC‘s ‘Parks & Recreation‘ populate the above list.

Aubrey Plaza is a favorite performer of 38.38% of this tribe’s members, a percentage that is 24.59 times greater than the average. 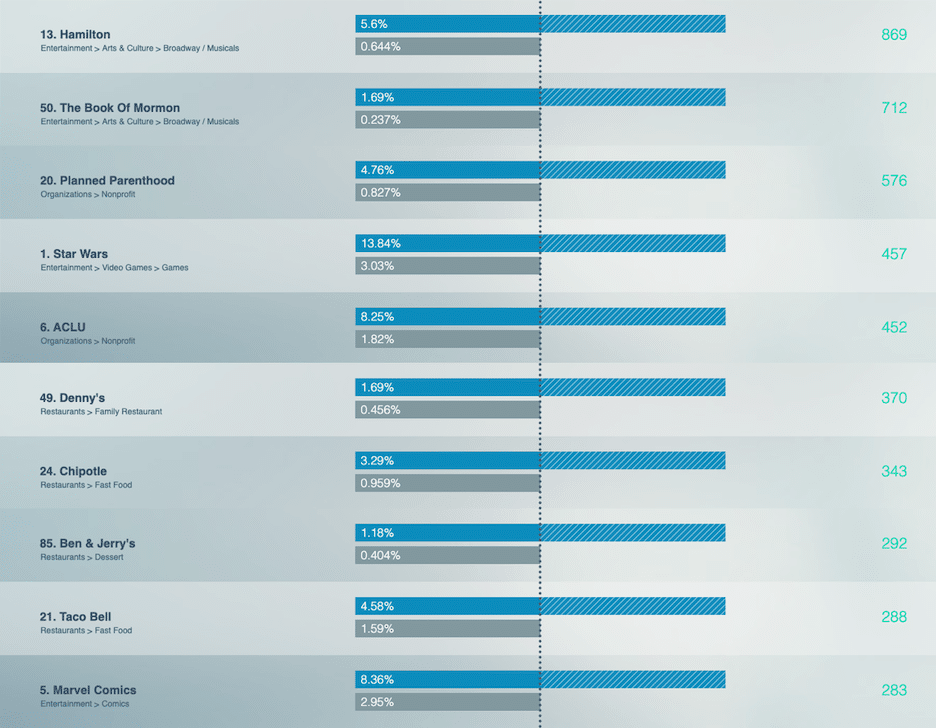 Patton Oswalt guested on ‘Parks & Rec,’ in 2013. He played a resident of the show’s fictional Pawnee, IN, filibustering a bill put before the city council. He did this by going into a long, convoluted pitch for a ‘Star Wars‘ / ‘Avengers‘ cross-over film.

The very amusing ramble was 100% ad-libbed, and producers uploaded the full, uncut nine-minute take to the internet. The clip wound up going viral.

13.84% of this tribe’s members are ‘Star Wars‘ fans, a percentage that is 4.57 times greater than the American average. Fans of Marvel are here to an extent that surpasses the index by 2.83 times.

Self-consciousness, as a personality trait, describes one who is self-aware, considerate, and understanding of their place in a given situation and/or discussion. This tribe averages in the 66.85th percentile for exhibiting this trait.